It's easy to understand UP, meaning toward the sky or at the top of the list, but when we awaken in the morning, why do we wake UP?

At a meeting, why does a topic come UP?  Why do we speak UP, and why are the officers UP for election and why is it UP to the secretary to write UP a  report?  We call UP our friends, brighten UP a room, polish UP the silver, warm UP the leftovers and clean UP the kitchen.  We lock UP the house and fix  UP the old  car.

At other times, this little word has real special meaning.   People stir UP trouble, line UP for tickets, work UP an appetite, and think UP excuses.

And this UP is confusing:  A drain must be opened UP because it is stopped  UP.


We open UP a store in the morning but we close it UP at night.  We seem to be pretty mixed UP about UP!

To be knowledgeable  about the proper uses of  UP, look UP the word UP in the dictionary.   In a desk-sized dictionary, it takes UP almost  1/4 of the page and can add UP to about thirty  definitions.

If you are  UP to it,  you might try building Up list of the many ways UP is  used.  It will take UP a lot of your time, but  if you don't give UP, you may wind  UP with a hundred or  more.

Did that one crack you UP?

The year is 1917 "One hundred years ago."
What a difference a century makes!
Here are some statistics for the Year 1917:
The average life expectancy for men was 47 years.
Fuel for cars was sold in drug stores only.
Only 14 percent of the homes had a bathtub.
Only 8 percent of the homes had a telephone.
The maximum speed limit in most cities was 10 mph.
The tallest structure in the world was the Eiffel Tower.
The average US wage in 1910 was 22 cents per hour.
The average US worker made between $200 and $400 per year.
A competent accountant could expect to earn $2000 per year.
A dentist $2,500 per year.
A veterinarian between $1,500 and $4,000 per year.
And, a mechanical engineer about $5,000 per year.
More than 95 percent of all births took place at home
Ninety percent of all Doctors had NO COLLEGE EDUCATION!
Instead, they attended so-called medical schools, many of which were condemned in the press AND the government as "substandard."
Sugar cost four cents a pound.
Eggs were fourteen cents a dozen.
Coffee was fifteen cents a pound.
Most women only washed their hair once a month,
And, used Borax or egg yolks for shampoo.
Canada passed a law that prohibited poor people from entering into their country for any reason.
The Five leading causes of death were:
1. Pneumonia and influenza
2. Tuberculosis
3. Diarrhea
4. Heart disease
5. Stroke
The American flag had 45 stars ...
The population of Las Vegas, Nevada was only 30.
Crossword puzzles, canned beer, and iced tea hadn't been invented yet.
There was neither a Mother's Day nor a Father's Day.
Two out of every 10 adults couldn't read or write.
And, only 6 percent of all Americans had graduated from high school.
Marijuana, heroin, and morphine were all available over the counter at local corner drugstores.
Back then pharmacists said, "Heroin clears the complexion, gives buoyancy to the mind, regulates

the stomach, bowels, and is, in fact, a perfect guardian of health!" (Shocking?)
Eighteen percent of households had at least one full-time servant or domestic help...
There were about 230 reported murders in the ENTIRE U.S.A. !
I am now going to forward this to someone else without typing it myself.
From there, it will be sent to others all over the WORLD all in a matter of seconds!

It is impossible to imagine what it may be like in another 100 years.

Which of the following names are you familiar with?

You had trouble with #5?
You know all the criminals, murderers, thieves, sluts and cheaters, but you don't know the Pope . . .
Lovely, just lovely!
Posted by R U Bourd at 11:16 AM No comments:

"Gentlemen, it is better to have died a small boy than to fumble the football"
- John Heisman

"I make my practices real hard because if a player is a quitter, I want him to quit in practice, not in a game."
– Bear Bryant/Alabama

"It isn't necessary to see a good tackle, you can hear it!”
- Knute Rockne/Notre Dame

"The man who complains about the way the ball bounces is likely to be the one who dropped it."
- Lou Holtz/Arkansas - Notre Dame

"When you win, nothing hurts."
- Joe Namath/Alabama

"A school without football is in danger of deteriorating into a medieval study hall."
- Frank Leahy/Notre Dame

"There's nothing that cleanses your soul like getting the hell kicked out of you."
- Woody Hayes/Ohio State

"In Alabama,an atheist is someone who doesn't believe in Bear Bryant.”
- Wally Butts/Georgia

"I never graduated from Iowa. But I was only there for two terms - Truman's and Eisenhower's."
– Alex Karras/Iowa

"My advice to defensive players is to take the shortest route to the ball, and arrive in a bad humor.”
- Bowden Wyatt/Tennessee

"I could have been a Rhodes Scholar except for my grades."
- Duffy Daugherty/Michigan State

"I asked Darrell Royal, the coach of the Texas Longhorns, why he didn’t recruit me." He said, "Well, Walt, we took a look at you, and you weren't any good."
- Walt Garrison/Oklahoma State

"Son, you've got a good engine, but your hands aren't on the steering wheel."
- Bobby Bowden/Florida State

After USC lost 51-0 to Notre Dame, his post-game message to his team was, "All those who need showers, take them."
- John McKay/USC

"If lessons are learned in defeat, our team is getting a great education.”
- Murray Warmath/Minnesota

"The only qualifications for a lineman are to be big and dumb. To be a back, you only have to be dumb."
- Knute Rockne/Notre Dame

"We live one day at a time and scratch where it itches."
- Darrell Royal/Texas

"We didn't tackle well today, but we made up for it by not blocking.”
- John McKay/USC

Why do Tennessee fans wear orange? So they can dress that way for the game on Saturday, go hunting on Sunday, and pick up trash on Monday.

What does the average Alabama player get on his SATs? Drool.

How many Florida State freshmen football players does it take to change a light bulb? None. That's a sophomore course.

How did the Auburn football player die from drinking milk? The cow fell on him.

Two Texas A&M football players were walking in the woods. One of them said, "Look, a dead bird."The other looked up in the sky and said,"Where?"

What do you say to a University of Georgia football player dressed in a three-piece suit? "Will the defendant please rise."

If three Arkansas football players are in the same car, who is driving?
The police officer.

How can you tell if an Old Miss football player has a girlfriend? There’s tobacco juice on both sides of the pickup truck.

What do you get when you put 32 Mississippi State cheerleaders in one room? A full set of teeth.

University of Michigan Coach Jim Harbaugh is only going to dress half of his players for the game this week; the other half will have to dress themselves.

How is the Kentucky football team like an opossum? They play dead at home and get killed on the road.

Why did the Tennessee linebacker steal a police car? He saw "911” on the side and thought it was a Porsche.

How do you get a former Miami football player off your porch? Pay him for the pizza.
Posted by R U Bourd at 10:50 AM No comments:

The proud owner of a magnificent 1956 Chevrolet convertible, wrote to say he had restored the car to perfection over the last few years, and sent this......

On a very warm summer afternoon he decided to take his car to town.  It needed gas, as the gauge was practically on empty, but he wanted ice cream, so he headed first to his favorite ice cream shop.

He had trouble finding a parking space and had to park the car down a side street.   He noticed a group of young guys standing around smoking cigarettes and eyeing my car rather covetously.  He was a bit uneasy leaving it there, but people often take interest in such an old and well-preserved car, so he went off to enjoy his ice cream.

The line at the ice cream shop was long and it took him quite a while to return to his car.  When he did, his worst fears were realized… his car was gone.

He called the police and reported the theft and then went back and bought a quart of pistachio ice cream.  About ten minutes later the police called him to say they had found the car abandoned near a gas station a few miles out of town.

It was unharmed and he was relieved.  It seems just before he called, the police had received a call from a young woman who was an employee at a self-service gas station.  She told them that three young men had driven in with this beautiful old convertible.  One of them came to the window and prepaid for 20 dollars-worth of gas.

Then all three of them walked around the car, looking at it carefully, and then just walked away…….without filling the tank.

The question is, why would anybody steal a car, pay for gas that they never pumped, and then abandon the car later and walk away?

Answer: They couldn't find where to put the gas! 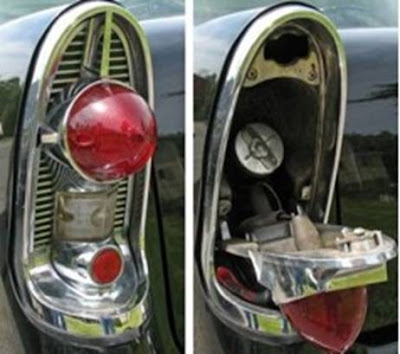 I think it's pretty cool how Chinese people made a language entirely out of tattoos.
Posted by R U Bourd at 10:40 AM No comments: